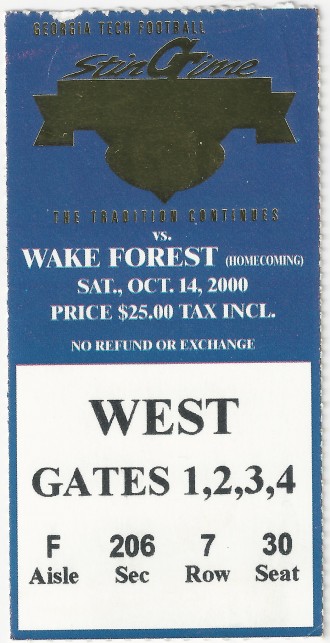 Having blown out the North Carolina Tar Heels in the second half two weeks earlier, the 4-2 Yellow Jackets remained home to face the 0-5 Wake Forest Demon Deacons.

The Yellow Jackets jumped out to an early 7-0 lead when Sidney Ford scored on an 18 yard run five minutes into the game to put Tech on top.

The Deacons answered before Tech’s offense could catch its breath, however, when Jamie Scott scored on a two yard run just five plays later. Wake gained 69 yards on just two plays, the first a 28 yard pass from Anthony Young to Fabian Davis and the second a 41 yard run by Terrence Williams.

The seven-all tie would be the closest that the Deacons would come the rest of the day. Tech added two more first quarter touchdowns and another early in the second quarter to extend its lead to 28-7. The first two scores came when George Godsey connected with Kelly Campbell for 53 and 35 yard touchdown passes to make it 21-7 and the third came on a 72 yard scoring strike to Kerry Watkins with eleven minutes to go in the half.

Wake Forest scored again with 3:39 to play when Young hit Ira Williams on a 16 yard touchdown pass to trim Tech’s lead to 14. The Deacon celebration was short lived, however, as Godsey hooked up with Nate Curry for a 9 yard touchdown with less than a minute remaining in the half. Tech would take a 35-14 lead into halftime.

The Jackets added the only points of the third quarter, scoring on two occasions. The first came when Luke Manget hit a 38 yard field goal three minutes into the second half to move the lead to 38-14. Joe Burns then added a touchdown with 2:24 remaining to extend Tech’s lead to 45-14, virtually ensuring a Ramblin’ Wreck victory.

The Deacons faked a punt early in the fourth quarter and completed a 38 yard pass to the Yellow Jacket 3 yard line. Ovie Mughelli would score shortly thereafter to make the score 45-20.

Tech then scored the game’s final points on an Andy Hall touchdown run from seven yards out with 36 second to play, and the Jackets would complete the 52-20 drubbing of the Demon Deacons.

Wake Forest went on to finish the season at 2-9, picking up its first victory two weeks after the Tech game in a 28-26 contest against the Duke Blue Devils. The Deacons defeated Navy 49-26 two weeks later to achieve their second victory.