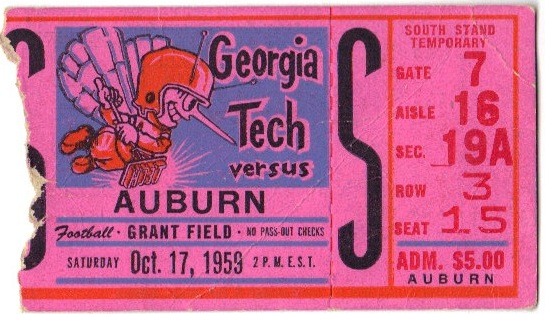 The Jackets and Tigers would renew their annual rivalry at Grant Field respectively holding the nation’s #4 and #11 rankings. Tech was on a roll, having defeated three consecutive top 10 teams in SMU, Clemson, and Tennessee en route to a perfect 4-0 record. Auburn entered at 2-1 with their lone blemish being a 3-0 defeat at the hands of the Vols in Knoxville. The squads tied the last meeting 7-7 in Atlanta in 1958 and the Tigers took the 1957 meeting 3-0 for their third win in nineteen tries dating back to 1938.

After each squad struggled to find its offense for the majority of the first half, the Jackets caught a break while punting to the Tigers late in the second quarter. John Kern muffed Gerald Burch’s 53 yard kick and Billy Shaw recovered for Tech at the Auburn 18 yard line to setup the Jackets with great field position.

Fred Braselton hit Charles Graning for 7 yards to the 11 before Taz Anderson lost 2 to the 13. Graning reeled off 12 yards on third down to the 1 yard line and Braselton snuck in for the score with 3:53 left in the first half. The Jackets would head to the locker room up 6-0 as the result of Tommy Wells’s missed extra point.

After halftime, the Tigers wasted no time in answering, as they marched 71 yards in just over 6 minutes and scored on a 6 yard run by Bobby Hunt. Ed Dyas then gave the Tigers a 7-6 lead with his successful point after.

Later in the quarter, the Jackets marched to the Tiger 29, but came away empty after Wells missed a 46 yard field goal attempt.

Twice more the Jackets threatened late in the fourth quarter, but came away empty on each occasion. The first drive came to a halt at the Tiger 23 when Anderson lost a fumble with 2:48 to play. The Yellow Jacket defense then earned a quick stop and blocked a Tiger punt to regain possession at the 21 with 6 seconds remaining. But Wells missed his second field goal of the day, this from 38, to ensure a one point defeat at the hands of Auburn.

The Jackets would fall to 9th in the polls after their first loss, as they prepared to face an overmatched Tulane team one week later in New Orleans. The Tigers went on to win their next three games and climb to 8th in the AP poll before dropping two of their final three to finish at 7-3 on the season.