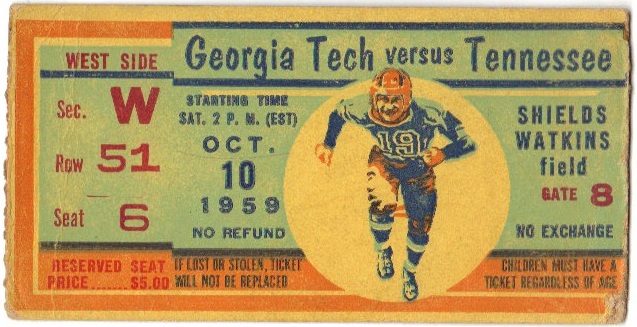 Having risen to the #3 spot in the latest AP rankings after defeating the 6th ranked Clemson Tigers, Georgia Tech went in search of its third straight win over a top 10 opponent when it headed to Knoxville to face the 8th ranked Tennessee Volunteers. The Jackets won the previous meeting 21-7 in Atlanta one year prior to halt a two game losing streak to the Vols and looked for its first win in the series since 1954.

The Jackets elected to play defense to open the game and forced a quick Tennessee punt after just one first down.

A personal foul against the Vols on the return set the Jackets up with great field position at their opponents’ 46 yard line, but offsides on first down negated a 12 yard run by Taz Anderson, pushing Tech back to its own 49. Billy Williamson came right back with 12 yards to the Volunteer 39 and Fred Braselton found Anderson for a first down two plays later at the 29. Two runs gained 4 yards before Braselton went back to Anderson for 16 and a first down at the 9. Three plays later, Braselton capped off the march with a 5 yard touchdown strike to Anderson for a 7-0 lead midway through the first quarter.

After the squads exchanged punts in Tech’s territory over the next several possessions, the Vols began from the Yellow Jacket 45 midway through the second period. Two runs netted 2 yards before Gene Etter picked up 9 and a first down at the 34. Etter then took to the air and found Charles Severance for 19 yards to the 11 before running twice more to the 4. He then capped off the drive with a 4 yard touchdown strike to Marvin Phillips to knot the game at 7-7 as the teams hit the locker rooms at intermission.

After the break, the Jackets quickly forced a Tennessee punt and began their first drive of the half near midfield. Williamson and Charles Graning combined for 5 yards on the ground and Braselton hit Anderson on a 15 yard strike to the 30. Braselton went back to the air and found Graning for 8 yards before Anderson took control. The junior fullback/end gained 21 yards on four runs, finally scoring from 1 yard out to putt Tech ahead for good at 14-7.

Etter nearly led Tennessee to a score on the next possession, but was turned away by the Ramblin’ Wreck defense after advancing the Vols all the way to Tech’s 5 yard line. The drive came to a halt when Maxie Baughan and Jack Moss corralled the junior quarterback for an 11 yard loss on 4th and goal from the 8.

With neither squad mounting another serious threat, the Jackets would go on to win and improve to 4-0 on the young season. Tennessee tied Alabama 7-7 one week later before going 3-3 over its final six contests to finish the year at 5-4-1.