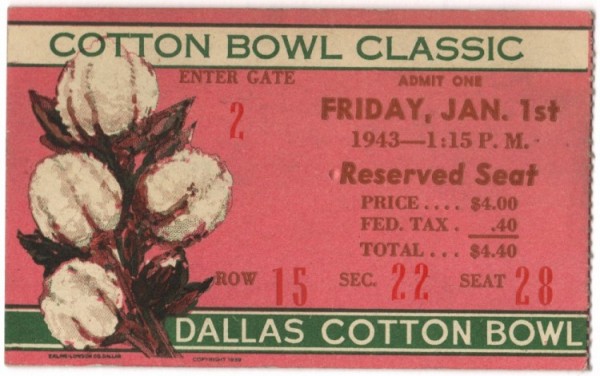 On New Year’s Day, Georgia Tech would play in their third bowl game, facing the Texas Longhorns in the Cotton Bowl. The Yellow Jackets were 9-1 with their only loss coming to archrival Georgia on Thanksgiving weekend, dashing Tech’s hopes at a National Title. Texas was playing in their first ever bowl game and carried a record of 8-2 with losses at Northwestern and at home to TCU.

Texas would take the ball on the opening kickoff, but the Yellow Jackets got lucky early. On the first play of the drive, Tech’s W.P. McHugh intercepted Roy McKay’s pass and the Jackets took over at the Texas 35 yard line. The drive did not materialize, however, as Tech turned the ball over on downs after advancing to the 22.

Tech’s luck turned quickly. Texas quick kicked on 2nd down on the following drive, and the Jackets took over at the Longhorn 45 yard line. Shortly thereafter, McHugh fumbled and Texas would recover on their own 48. The Longhorns proceeded to march 52 yards on 13 plays for the game’s first score. Tech nearly held their opponent at the 6 yard line on 4th and 2, but McKay barely picked up the first down on a 2 yard run to the 4. On the scoring play, McKay’s pass was tipped into the air by Clint Castleberry, but caught by John Minor while falling out of bounds in the end zone. It was a controversial call by the officials, but gave Texas a 7-0 lead late in the first quarter.

The second quarter was a defensive battle. Tech advanced to the Longhorn 31, but lost 20 yards on two plays and would punt back to their opponent. The teams exchanged punts and then Tech recovered Walton Roberts’s fumble at the Longhorn 30 yard line. Just when things were looking up for the Jackets, Robert Jordan fumbled on the third play of the ensuing drive; Texas would recover and take over at their own 27. After another Longhorn punt, Tech would throw an interception at the Texas 25, ending yet another drive on a turnover. The Longhorns would punt back to the Yellow Jackets and the half would end just a few plays into the drive.

Tech took the ball first in the third quarter, but the drive did not last long, and the Jackets punted to the Texas 17 yard line. The Longhorns proceeded to take the ball 71 yards on 14 plays to the Tech 12. But Coach Alexander’s defense held strong, and the Jackets forced a turnover on downs after McKay threw two incomplete passes to end the drive.

It was then that Jackets caught another bad break. After gaining just 8 yards on three plays, Tech punted to the Longhorns. Jackie field caught the punt at the Texas 40 yard line and raced 60 yards for Texas’ second touchdown and a 14-0 lead. Each of the teams’ next drive would stall, and the third quarter ended as the Jackets were looking at 3rd and 2 from their own 28 yard line.

The Jackets punted shortly into the fourth quarter and, after just three plays, Texas punted it right back. It was then that Tech came alive. Beginning at their own 33 yard line, the boys in white and gold quickly gained a first down at the 44. Then, on an incredible play, Bob Sheldon hit Jack Marshall for a 23 yard pass to the Texas 23 yard line. Marshall made an amazing leaping catch to stave off an interception by two Longhorn defenders. Two plays later, Castleberry connected with Jack Helms to give Tech a first down at the 6 yard line. After three straight runs, the Ramblin’ Wreck was looking at 4th and goal from the 3. Desperately needing a score, Eddie Prokop dropped back to pass and Davey Eldredge snagged the ball out of his hands on the Statue of Liberty play, rushing into the end zone for the Jackets’ first score, and cutting the Texas lead to 14-7.

After a quick Texas punt, the Jackets were back at it again. Taking over at their own 46 on a bad Longhorn punt, Prokop connected with Sheldon for 17 yards on the first play, giving Tech a first down at the Texas 37. Two plays later, Marshall would take Prokop’s pass to the Texas 9 yard line, a 24 yard strike. A 5 yard offsides penalty backed the Jackets up to the 14, but Jordan then reeled off 10 yards to the 4 yard line, making it second and goal. But Tech would not solidify the comeback. After a short run by Prokop and an incomplete pass, the Wreck was looking at 4th and goal from the 3. Sheldon’s pass fell incomplete as the ball slipped out of his hands on an attempted pass and the Longhorns took over with little time remaining.

Texas would run out the clock, giving them their first ever bowl victory. It was the first bowl loss for Tech and a heart-breaking way to end a season that had such high hopes just five weeks earlier.