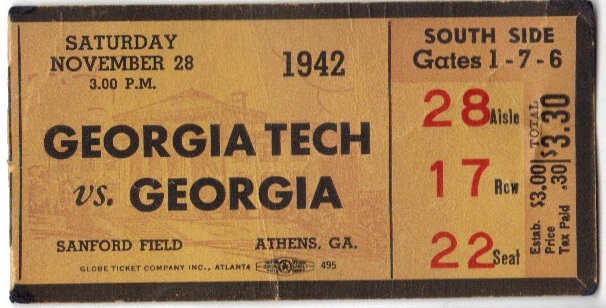 In the final week of the regular season, the Yellow Jackets and Bulldogs would face off as the 2nd and 5th ranked teams in the AP poll, respectively. The teams nearly met as 1st and 2nd, but Georgia lost the top spot after dropping a 27-13 contest at Auburn the previous week, falling to 5th. Tech’s record was a perfect 9-0 while Georgia’s squad was 9-1, and the likely prize for the latest installment of “Clean, Old Fashioned Hate” would be a bid to play in the Rose Bowl on New Year’s Day.

Tech gained the momentum early, recovering George Poschner’s fumble at the Bulldog 36 yard line on the opening kickoff. The Jackets were unable to capitalize, however, and were forced to punt. The next several drives played out in similar fashion, as the teams exchanged punts with neither club threatening to score. Georgia finally caught a break when Frank Sinkwich intercepted Clinton Castleberry’s pass at the Tech 44 and returned the ball to the 36. The Bulldogs scored after just three plays that included a 19 yard run by Sinkwich and a 16 yard touchdown pass from Charles Trippi to Van Davis. The Bulldogs would lead 7-0 lead after the extra point.

After a Tech three and out, Georgia would score again on a 10 play 92 yard drive that included a 5 yard penalty on the Jackets. Sinkwich completed passes of 11, 26, and 18 yards in route to Georgia’s second score. Davis capped off the drive at the start of the second quarter with a 6 yard run for the touchdown, giving the Bulldogs a 14-0 lead after the extra point.

After a quick Tech punt, Georgia nearly scored again, but threw an interception in the end zone. Tech went 29 yards on the first two plays before the drive stalled and the Jackets punted the ball out of bounds at the Bulldogs 13 yard line. On Georgia’s first play, Trippi burst for 87 yards and a touchdown, making it 20-0 after the missed extra point; a lead the Bulldogs would carry into halftime.

Tech surrendered two more touchdowns late in third quarter. After holding the Bulldogs short of the end zone at the 3 yard line, the Jackets would punt after gaining only one first down. The punt was partially blocked, and Georgia took over at the Tech 41. Trippi threw a 38 yard touchdown pass shortly thereafter to make it 27-0. After the kickoff, Prokop threw an interception on the first play, and Georgia scored its final touchdown of the game to take a 34-0 lead. Neither team would threaten to score again.

Georgia would go on to beat UCLA in the Rose Bowl 9-0 and end the season at the #2 spot in the AP poll. Sinkwich finished the season a consensus All-American, led the nation in total offense, and won the Heisman Trophy.