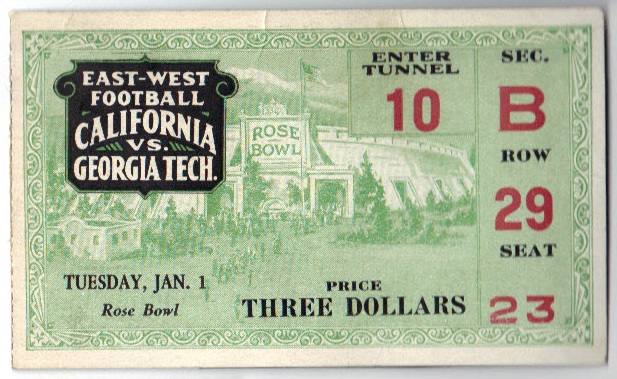 Georgia Tech came into the game with a 9-0 record and was to face a 6-1-2 California squad that had tied the undefeated USC Trojans 0-0 on October 20. While the Golden Bears were not the Pacific Coast Conference champions, they were selected by the Rose Bowl after USC declined a bid to play in the game. The two teams faced off in front of 70,000 fans in the annual New Years Day bowl game.

The first score of the game was a direct result of the most famous play in Rose Bowl history. Midway through the second quarter, Georgia Tech’s John Griffin “Stumpy” Thomason fumbled the ball on the Yellow Jacket 30 yard line. California center Roy Riegels scooped up the ball and proceeded to run 65 yards in the wrong direction. Golden Bear teammate Benny Lom chased Riegels, screaming at him in an attempt to get him to stop. By the time Lom caught Riegels and began to turn him around, several Tech players had reached him as well, and he was tackled at the Golden Bear 1 yard line. Rather than risk a play so close to their own end zone, California chose to punt, but the punt was blocked by Georgia Tech’s Vance Maree for a safety, giving the Yellow Jackets a 2-0 lead.

After several strong defensive stands by both teams in the third quarter, Tech received a California punt that gave them the ball at the Golden Bear 45 yard line. On the first play of the drive, Tech’s Warner Mizell reeled off a 30 yard run to take the ball to the California 15 yard line. On the very next play, Thomason took the ball 15 yards into the end zone, capping off a 2 play, 45 yard drive that gave the Jackets an 8-0 lead after the missed extra point.

California would not score until the start of the 4th quarter, after an 80 yard drive ended with a touchdown as the result of Lom’s 10 yard pass to end Irvine Phillips. After the extra point, the Yellow Jacket lead had been cut to 1 point, at 8-7.

Neither team would score again, and Georgia Tech would go on to win their first bowl game and their second National Championship.

– Clip of the Roy Riegels run