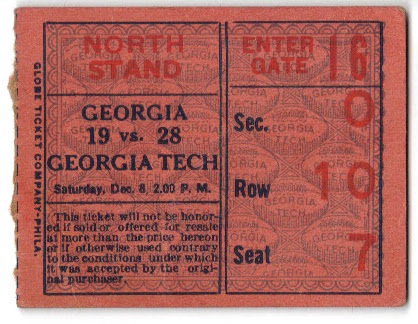 Georgia Tech entered the game with a perfect 8-0 record and was heavily favored over a Bulldog team that had lost 3 straight. To make matters worse, the Georgia team had been stricken by a bad case of influenza, leading most fans to believe that Tech would win in a blowout.

In the game’s first notable action, Tech’s Warner Mizell fumbled a lateral at the Tech 27 yard line that was scooped up by Georgia’s Henry Palmer and returned to the Yellow Jacket 12 yard line. After three unsuccessful running plays, Georgia threw a touchdown pass on fourth down for the game’s first score.

In the second quarter, Georgia’s Herdis McCrary fumbled a lateral which was recovered by Tech’s G.C. Watkins at the Bulldog 18 yard line. The Jackets drove the ball to the Georgia 8 yard line after three plays for a first down. After three short gains, Tech was able to punch the ball into the end zone on fourth down for their first score of the game.

The 3rd quarter was all Tech. After an unsuccessful Bulldog drive, the Jackets returned the ball to their own 43 yard line. Shortly after, Tech’s John Griffin “Stumpy” Thomason reeled off a 42 yard run to get the ball to the Georgia 15 yard line. After one first down, Tech was able to run the ball in for its second score of the game.

Tech’s final score came on a 13 play, 50 yard drive in the third quarter to give the Jackets a 20-6 lead. The Golden Tornado would close the game out, and the win would result in a perfect 9-0 record, the Southern Conference championship, and an invitation to face the California Golden Bears in the Rose Bowl (Tech’s first bowl game).