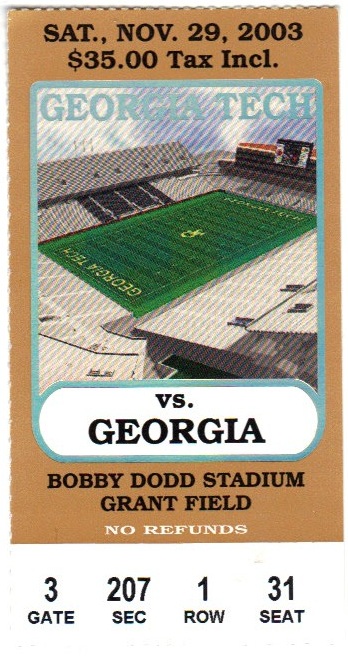 After dropping two of its final three games to fall to 6-5 on the year, Georgia Tech looked to improve its bowl destination when it faced the 5th ranked, 9-2 Georgia Bulldogs in Atlanta in the annual installation of “Clean, Old-Fashioned Hate.” Since winning three straight games from 1998 to 2000, Tech had dropped each of the last two contests, most recently falling 51-7 in Athens in 2002 for its worst loss in the history of the series.

Each squad lost possession on its opening drive as the result of a turnover before the defenses settled in and forced a few punts. The Jackets then pushed to Georgia 36, but lost the ball on downs after Reggie Ball’s pass on fourth-and-two fell incomplete. David Greene found Fred Gibson for 46 yards on the first play to follow for a first down at the Tech 17, and a pair of runs that followed setup a first-and-goal at the 4. Greene then scrambled under pressure and Daryl Smith forced a fumble that bounced into the end zone, but Nick Jones recovered over the goal line for a touchdown and a 7-0 Bulldog lead.

The Georgia defense forced a three-and-out on the ensuing Tech drive and blocked the attempted punt for a first down at the Yellow Jacket 13 yard line. Kregg Lumpkin then raced into the end zone on the first play to follow to increase the Georgia lead to 14-0 late in the first quarter.

Dan Burnett gave the Jackets a field goal early in the second, but Georgia countered with a pair of its own to ensure a 20-3 lead at intermission.

Subbing for an injured Reggie Ball, A.J. Suggs threw an interception to Thomas Davis early in the third quarter to setup another Georgia score. Greene found Gibson for 26 yards on third down, and Jeremy Thomas added the touchdown from the one yard line on the next play for a 27-3 advantage.

Tech eventually answered with an 11 play, 62 yard drive to cut the lead to 27-10. Suggs found Jonathan Smith for the score with a 35 yard touchdown pass with 5:05 left in the third quarter.

Georgia then secured the game midway through the final period when Greene hit Lumpkin for an 11 yard touchdown pass to cap off a 68 yard drive that consumed nearly seven minutes of the quarter.

Trailing 34-10, the Jackets grabbed one final score when Suggs found Levon Thomas for a 43 yard touchdown strike to make it 34-17. Georgia then recovered Tech’s attempted onside kick on the ensuing kickoff and drained the clock to wrap up the victory.

Georgia faced LSU in the SEC championship game on week later, where it fell 34-13 to the eventual National Champions. The Bulldogs then earned a trip to the Capital One Bowl and eventually defeated Purdue 34-27 to finish the season at 11-3, overall.