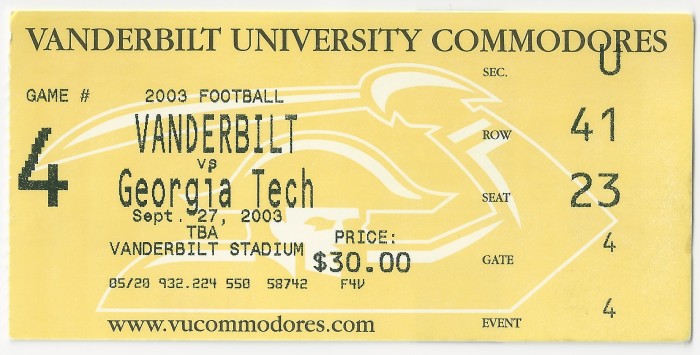 After a 1-3 start to the season, Georgia Tech looked to rebound in Nashville, Tennessee where it would complete a home-and-home series with the one-time SEC rival Vanderbilt Commodores. The Jackets took the last meeting between the two schools in convincing fashion with a 45-0 shutout to open the 2002 campaign and improve to 17-15-3 in the all-time series. Vanderbilt’s last win over the Jackets came in 1941 in Nashville in the form of a 14-7 decision. Since then, Tech had won nine of ten meetings, with the lone exception being a 10-10 tie in Nashville in 1965. The Commodores also entered the contest at 1-3, defeating only U.T. Chattanooga to avoid a winless start.

After recovering a Vanderbilt fumble at the Commodore 34 on the opening kick, Georgia Tech gained just four yards on its first three plays before facing 4th-and-6 from the 30. Rather than elect to take the field goal, the Tech offense went for the first down, but gained just 2 yards on a P.J. Daniels run to turn the ball over on downs at the 28.

The Commodores quickly punted, but the Jackets gave it right back with a Reggie Ball interception at the Tech 31 yard line. However, another solid stand by the Yellow Jacket defense put the ball back in the hands of the Tech offense at the Ramblin’ Wreck 11. Ball then led the offense 71 yards in 10 plays before stalling at the Vanderbilt 18 on 4th-and-12. Dan Burnett finally connected on a 35 yard field goal that gave the Jackets a 3-0 lead at the 4:49 mark in the first quarter.

Vanderbilt failed to earn a first down on the ensuing drive and Jonathan Smith returned a punt 20 yards to set Tech up with excellent field position at the Commodore 31. P.J. Daniels kicked off the drive with back-to-back runs of 10 and 16 yards to the 5 before following up with a touchdown two plays later for a 10-0 lead.

The Commodore offense then found its stride, covering 66 yards in 8 plays to make it 10-7 at the start of the second quarter. Jay Cutler then setup a 9 yard touchdown run by Norval McKenzie with a 32 yard scramble on 3rd-and-1 from the Yellow Jacket 44 yard line.

Tech remained ahead by 3 until the closing seconds of the first half when Tolga Ertugrul hit a 32 yard field goal to tie the game 10-10 at intermission.

The tie held throughout the third quarter and most of the fourth before Vanderbilt took at 17-10 lead with 2:12 left in regulation. Cutler setup another short touchdown run by McKenzie with a 33 yard pass to Brandon Smith from the Ramblin’ Wreck 38 yard line.

Trailing by a touchdown, Reggie Ball commanded an 8 play, 79 yard drive to tie the game at 17 with 32 seconds to play. Ball rushed for 54 yards on the drive while completing 4 of 5 passes, including a 6 yard touchdown to John Paul Foschi to finish the drive. The most notable play was a 45 yard scamper by Ball on 3rd and 3 from the Ramblin’ Wreck 18 yard line.

Cutler led the Commodores to the Tech 27 in a valiant attempt for the win, but Eric Henderson blocked Ertugrul’s 44 yard field goal attempt and Reuben Houston recovered to force overtime.

Vanderbilt won the toss and elected to play defense first in the first overtime. On the first play of the Tech possession, Reggie Ball broke loose for a 25 yard touchdown run to give Tech a 24-17 advantage.

Cutler went deep on Vanderbilt’s first play to follow, but was picked off by James Butler at the 2 yard line to end the game in a seven point victory for the Jackets.

The victory would be the beginning of a four-game winning streak for the Jackets, whereas the Commodores would go on to lose all but one of their remaining games to finish the season at 2-10, overall. The campaign would mark the 21st straight losing season for Vandy, whose last bowl appearance came in a 36-28 loss to Air Force in the Hall of Fame Classic on December 31, 1982.