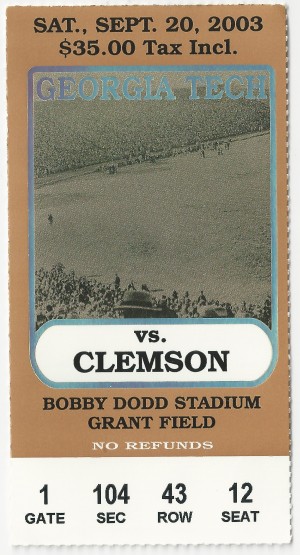 After a disappointing 1-2 start to the season, Georgia Tech looked to even its record with a match against the ACC rival Clemson Tigers. At 2-1, Clemson’s lone loss came in the season opener against Georgia in Death Valley. The Tigers had beaten the Jackets in each of the last two meetings to improve to 22-43 in the all-time series.

Tech remained in a scoreless tie for much of the first quarter, nabbing an early interception and forcing two punts before surrendering a 23 yard field goal with 1:07 remaining to fall behind 3-0.

The Tigers then added 20 second quarter points to Tech’s 3 to jump ahead 23-3 at intermission. Charlie Whitehurst first threw a pair of touchdown passes to Tony Elliott and Kevin Youngblood from 9 and 12 yards, respectively. Dan Burnett then gave Tech a 20 yard field goal with just 40 seconds to play to cut it to 17-3, but the Tigers quickly answered with a 33 yard touchdown pass from Whitehurst to Airese Currie. A missed extra point by Aaron Hunt, however, would leave the Tiger lead at twenty points at the break.

Early in the third quarter Tech advanced to the Clemson 25 before eventually turning the ball over on downs at the 35 following a sack and a pair of incomplete passes. The Tigers then pinned the Jackets deep in their own territory with a punt to the 11 and sacked Ball in the end zone shortly thereafter for a safety, making it 25-3 midway through the period.

Tech did not threaten again for the remainder of the contest, while the Tigers added two more fourth quarter touchdowns to reach the 39-3 final. Duane Coleman accounted for the first score with a 25 yard touchdown run at the 8:49 mark, and Whitehurst scored on a 1 yard keeper with 3:57 remaining to complete the scoring.

Clemson would go on to finish the regular season at 8-4 and earn a berth in the Chic-fil-A Peach Bowl to face the Tennessee Volunteers. The Tigers would go on to drop the Vols 27-14 to finish at 9-4 as the 23rd ranked team in the final AP poll.