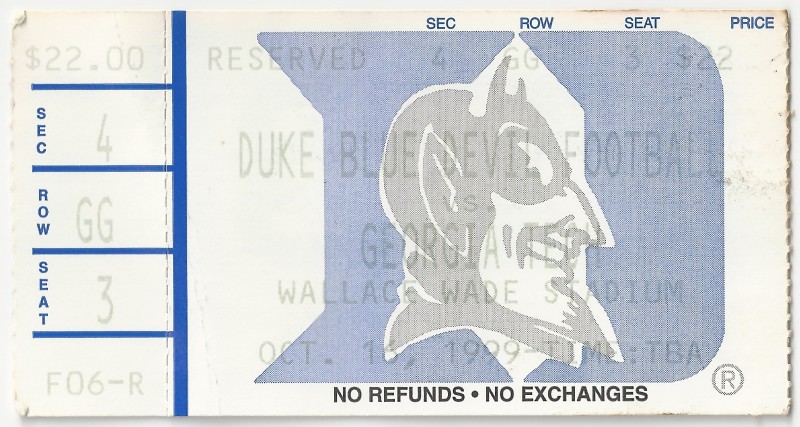 One week after leading his Yellow Jackets to the first overtime victory in school history over the North Carolina Tar Heels, Joe Hamilton led another fourth quarter comeback to top the Duke Blue Devils at Wallace Wade Stadium in Durham. Duke entered the game at an abysmal 1-4 while the 7th ranked Yellow Jackets carried a record of 4-1.

Tech started strong, scoring on its first three drives while holding the Blue Devils scoreless to take a 21-0 lead early in the second quarter. The first score came on a 25 yard pass to Dez White that capped off a 9 play 81 yard drive. The second came after Matt Uremovich intercepted at the Ramblin’ Wreck 42 on Duke’s ensuing drive. A few plays later, Hamilton connected on a 50 yard pass to Kelly Campbell to advance to the Duke five yard line. Phillip Rogers then added a short touchdown run on third down to push the lead to 14-0. Rogers added the third touchdown as well, capping off a 16 play 80 yard drive on which Hamilton accounted for 73 total yards.

Just as it looked as if Tech would run away with the game, Duke came back strong. Blue Devil quarterback Spencer Romine led his team 80 yards in 9 plays for their first score, hitting Scottie Montgomery from 7 yards out for the touchdown. Duke’s LeVar Johnson recovered a Tech fumble on the following drive, and Romine struck again, leading the Devils 44 yards in seven plays and scoring on a one yard sneak to get within seven at 21-14.

The Jackets took over at the 25 yard line on the following drive and Hamilton again led the offense down the field for a score. After marching 75 yards in 12 plays, Tech scored when the Heisman candidate hit Jon Muyers on a 14 yard touchdown pass with less than one minute to play. Tech would take a 28-14 lead into halftime.

But in the third quarter, Duke’s offense came alive while Tech’s sputtered. On the opening drive, Romine drove his Blue Devils 80 yards in 9 plays and scored on a 5 yard touchdown run to cut the lead to 28-21. The Blue Devils scored again to cut the lead to 4 when Romine led his offense to the Yellow Jacket 15 yard line and Sims Lenhardt hit a 32 yard field goal. Tech’s offense gained just 20 yards in the third quarter, and the once comfortable Ramblin’ Wreck lead had been cut to 28-24 at the start of the final period.

Tech’s bad luck continued in the fourth quarter when Rogers fumbled a pitch and Dyan Stallmeyer recovered for Duke at the Yellow Jacket 44 yard line. The Blue Devils scored just four plays later on an 11 yard run by Romine to take the lead at 31-28.

Tech couldn’t get anything going on their next drive, but punter Dan Dyke gave the defense a much needed assist by pinning the Blue Devils at their own one yard line. The defense held Duke to a three and out and the Yellow Jackets took over at the Blue Devil 37 yard line after a short punt. Hamilton led the offense to the four, but was unable to secure a touchdown, and Luke Manget added a short field goal to tie the game at 31-31 midway through the final quarter.

On Duke’s next drive, the Yellow Jacket defense got another much needed stop and Marvious Hester returned the Blue Devil punt to Tech’s 30 yard line. With little time remaining, Hamilton struck fast, connecting on a 36 yard pass to Campbell to move into Duke territory. After a one yard gain by Sean Gregory, Dez White gained 14 on an option pitch to the Duke 19. Gregory then burst through the middle on a dive play for a 19 yard touchdown that proved to be the winning score with 1:52 remaining. Duke failed to gain a first down on their final possession and Tech went on to win 38-31.