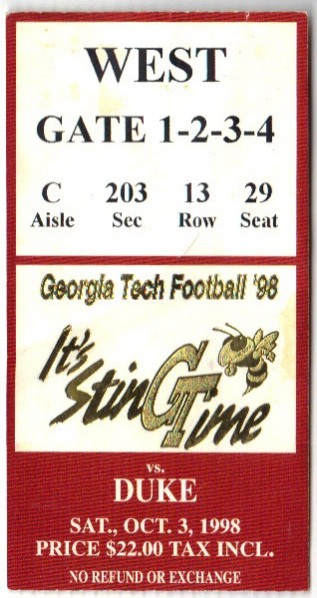 The Jackets returned home to face the Duke Blue Devils one week after dismantling the UNC Tar Heels in Chapel Hill. Duke stood at a respectable 2-2 with its two losses coming to the 10th ranked Florida State Seminoles and the 11th ranked Virginia Cavaliers. Their victories, however, were not very impressive, coming against the Western Carolina Catamounts and the Northwestern Wildcats. Furthermore, the Blue Devils were riding a 20 game ACC losing streak, with their last victory coming against the Wake Forest Demon Deacons in the 1995 season.

Joe Hamilton jumped out to a quick start in leading the offense to a touchdown after just 92 seconds of play. The junior quarterback found the end zone with a 53 yard strike to Dez White to put Tech up 7-0 early in the first quarter.

The Blue Devils got on the board shortly thereafter when Sims Lenhardt nailed a 45 yard field goal to make it 7-3.

Tech would score once more in the first quarter to extend its lead to 10-3 on a 23 yard field goal by Brad Chambers.

Early in the second quarter, Hamilton extended the lead for the Jackets with his second touchdown pass, this from four yards out to Curtis Holloman. The score upped Tech’s lead to 17-3.

The Ramblin’ Wreck defense came up big on the ensuing possession when Matt Uremovich recovered a Duke fumble and raced 54 yards for another Yellow Jacket touchdown. The score was the third defensive touchdown in as many games for the Jackets, who now held a 24-3 advantage.

Lenhardt gave the Blue Devils a 50 yard field goal with just a few seconds remaining in the first half and the Jackets would lead 24-6 at halftime.

Duke came out strong in the third quarter to score their only touchdown of the game. Letavious Wilks was responsible for the score, taking the ball in from six yards out to cut the Tech lead to 24-13.

The Yellow Jacket offense spent much of the third quarter asleep before rousing in the final period of play. Hamilton first hit Phillip Rogers for a 33 yard touchdown to increase Tech’s lead to 31-13. Ed Wilder then scored from 11 yards out to make it 38-3, and backup kicker Kai Cornwell connected from 33 yards to wrap up the scoring with two minutes to play.

Duke would go on to win two of its next three games, defeating Wake Forest and Clemson before dropping its final three contests to finish at 4-7, just two games short of bowl eligibility.