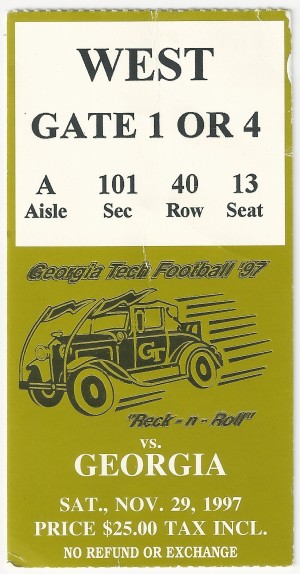 Riding a two-game winning streak and having become bowl eligible for the first time since 1991, Georgia Tech looked to end the regular season on a positive note when it played host to the archrival Georgia Bulldogs at Grant Field. The Jackets had lost six straight in the series, with their last win coming in the form of a 40-23 blowout in Athens in 1990. Georgia entered the contest at 8-2 as the nation’s 14th-ranked team with losses to the Auburn Tigers and the Tennessee Volunteers.

On the game’s opening possession, Mike Bobo put the Bulldogs on top 7-0 with a 54 yard touchdown pass to Hines Ward just 1:18 into the contest.

The squads then sparred around for much of the first quarter with relatively little action before the Bulldogs found themselves pinned deep in their own territory with less than two minutes to play. Tech defensive tackle Jesse Tarplin then gave the Jackets a boost when he picked off Bobo at the 6 yard line to setup a first-and-goal. Joe Hamilton followed the pick with a 6 yard touchdown run one play later that knotted the game at 7-all with 1:43 remaining in the period.

Georgia would eventually regain the lead at 14-7 late in the second quarter when Bobo went deep to Corey Allen for a 59 yard touchdown with 1:47 remaining in the first half.

The Jackets quickly pushed into scoring position while chewing a minute off the clock, but failed to reach the end zone and faced a fourth down at the 4 yard line. Dave Frakes then cut the margin to four when his 21 yard field goal was true to make it 14-10 in favor of the Bulldogs.

Georgia would push to the Tech 18 before the half ended, but missed out on a scoring opportunity when Keith Brooking blocked Dax Langley’s 35 yard field goal attempt as time expired.

Much of the third quarter played out as a chess match, as neither team seriously threatened to score. But the Bulldogs mounted a drive late in the period, and went ahead 21-10 on a 1 yard touchdown pass from Bobo to Ward that put the Jackets behind the eight ball.

Tech advanced as far as Georgia’s 6 later in the period, but was forced to settle for a 23 yard field goal by Frakes that would prove to be costly in the end. Nevertheless, the Jackets had pulled within eight at 21-13 at the start of the fourth quarter.

While the Yellow Jacket defense held the Bulldogs scoreless, Frakes was able to add a 45 yard fourth quarter field goal to pull Tech within five at 21-16.

Late in the period, Hamilton led the Jackets deep into Georgia territory, and Tech took the lead on a 3 yard touchdown run by Wiley with just 48 seconds remaining. Hamilton hit Mike Sherman in the end zone for the two-point conversion, and the Jackets appeared to have snatched a victory in the final minutes of the contest.

But the Bulldogs took over at their own 35 following the kickoff and began a late march down the field. Bobo hit Champ Bailey for 27 yards on first down to the Georgia Tech 38, and a Travares Tillman’s second down interception was nullified by a pass interference call on Donte Booker. Suddenly the Bulldogs found themselves at the Yellow Jacket 9 facing a first-and-goal. Bobo dropped back on the next play and found Allen for a 9 yard touchdown to give Georgia a 27-24 lead that proved to be the final.

Despite the 9-2 finish, Georgia was held out of the SEC championship game when Tennessee defeated Vanderbilt earlier in the day. The Bulldogs would go on to face Wisconsin in the Outback Bowl, where they would dismantle the Badgers 33-6 to finish the year at 10-2 with the #10 ranking in the AP poll.