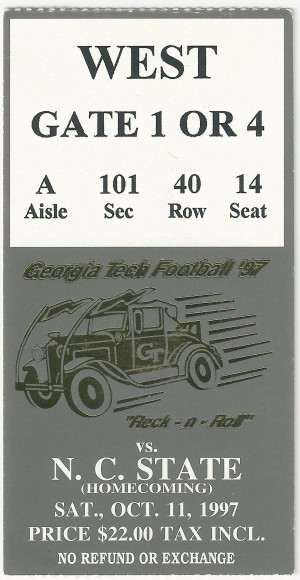 Having cracked the AP rankings at #25 after dismantling Boston College for its third straight win, Georgia Tech returned to Atlanta to face the North Carolina State Wolfpack in just its second home game of the ’97 season. The Wolfpack entered the contest at 3-2 after suffering a heartbreaking 19-18 loss at Wake Forest one week earlier when the Deacons scored the winning field goal with just 43 seconds remaining. Tech and NC State last met in the 1996 season opener for both schools in Raleigh, NC. The Jackets won the game 28-16 to improve to 10-7 in the all-time series.

NC State got on the board first midway through the first quarter when Jamie Barnette found Torry Holt for a 25 yard touchdown that put the Wolfpack on top 7-0.

The Jackets trailed until midway through the second quarter when Joe Hamilton led a 72 yard scoring drive that was capped off by a 1 yard Charles Wiley touchdown run.

Late in the half, the Wolfpack mounted a drive into Tech territory before eventually stalling at the Yellow Jacket 20 yard line. Chris Hensler came on to connect on a 37 yard field goal to put the Pack on top 10-7 with roughly a minute left in the half, and the Jackets would trail by three at the break.

Midway through the third quarter, Tech began at its own 34 and put together a solid drive into Wolfpack territory. Phillip Rogers would eventually cap off the 66 yard march with a 4 yard touchdown run to put Tech back on top 14-10 with 6:24 to play in the period.

The Yellow Jacket defense quickly surrendered the lead on the drive that followed, however, allowing the Wolfpack to score just two minutes later on a one yard run by Rahshon Spikes to make it 17-14.

But Hamilton returned to lead the Ramblin’ Wreck offense deep into NC State territory before facing a fourth-and-goal from the two as the third quarter came to a close. Dave Frakes then connected from 19 yards out to tie the game at 17 on the first play of the final stanza.

Roughly five minutes later, the Jackets would regain the lead on an 18 yard run by Hamilton that made it 24-17.

Tech’s defense held strong the remainder of the way, and Frakes added an insurance field goal from 25 yards out with 32 seconds remaining to seal the Tech win.

The Wolfpack would go on to lose their next two games before ending the season on a three game winning streak to finish at 6-5 for the year. But despite gaining eligibility, the Wolfpack would not be selected to participate in a bowl game.