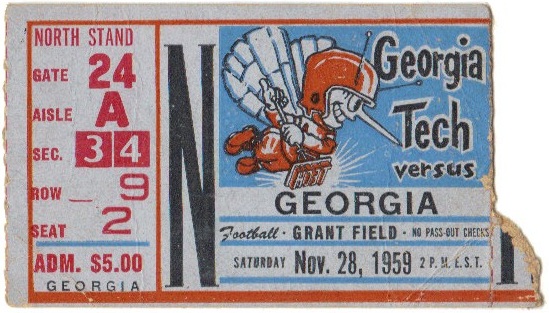 Having dropped two of their last three games, the Yellow Jackets would renew their annual rivalry with the 6th ranked Georgia Bulldogs on The Flats in search of a much needed victory. Tech had fallen in the previous two meetings between the rivals after winning eight straight from 1949 to 1956. Georgia entered at 8-1, with the lone blemish coming in a 30-14 loss at South Carolina in the third week of the season. Their signature win came one week earlier when they defeated the 8th ranked Auburn Tigers 14-13 in Athens.

Taz Anderson put the Jackets in a hole on the opening kickoff when he lost a fumble to Georgia’s Jimmy Vickers at the Tech 24 yard line. The Jackets caught a break three plays later, however, when Gerald Burch recovered a Bill Godfrey fumble at the 15 to halt the Bulldog attack.

Georgia threatened to score on its next possession, but came away empty after advancing to Tech’s 12 when Fran Tarkenton threw an interception to Billy Williamson at the 2 yard line on third down. A quick Tech punt put the ball back in Georgia’s hands until Tarkenton lost a fumble to Billy Shaw at the Tech 27.

The Jackets gave the ball right back when Ben Smith lost a fumble to Fred Lawrence at the Tech 33 and Georgia was at it again. Charles Britt lost 7 on first down, but Fred Brown followed with a 38 yard scamper to the Yellow Jacket 2 yard line. George Guisler found the end zone two plays later on a pitch to put the Bulldogs ahead 7-0.

Tech shot itself in the foot after the kickoff when Fred Braselton lost a fumble at his own 35, but solid defense by the Jackets forced a Georgia punt that was downed at the Ramblin’ Wreck 2 yard line.

The Jackets punted soon thereafter and Georgia began its ensuing drive near midfield. Tarkenton found Brown for 12 yards on first down and Guisler raced 22 yards to the 12 on 4th and 7. Tarkenton went back to the air on third down and connected with William Herron for a touchdown to increase the Georgia lead to 14-0.

The Jackets quick-kicked early in their next possession, but Georgia was ready for it and returned the ball to Tech’s 45 yard line. Britt found Brown a few plays later for a 40 yard touchdown pass that made it 21-0 at intermission.

Braselton would leave the game with an injury in the first half and be replaced by backup quarterback Marvin Tibbetts.

The third quarter passed with little action until the Jackets began near their own 30 late in the period. Tibbetts found Anderson for 15 yards to the Tech 43 before dumping a screen pass to Burch that resulted in a 57 yard touchdown, making it 21-7 with 12 seconds to play in the third.

A quick defensive stand forced a Georgia punt and when Bobby Walden muffed the snap, the Jackets took over at the Bulldog 14 yard line. Tech would line up for a field goal on fourth down, but faked the try and turned the ball over when Tibbetts was tackled for a loss at the 19.

On its next possession, Tech marched all the way to Georgia’s goal line with the aid of a 45 yard run by Burch, but turned the ball over on downs when Floyd Faucette fell down three yards short of the end zone on 4th down.

A Georgia punt gave Tech another chance from the Bulldog 45 and the Jackets scored in just two plays. Tibbetts picked up 7 on first down before finding Fred Murphy for a 38 yard touchdown strike to make it 21-14 with 3:00 to play.

The Bulldog lead proved too much to overcome though, as Georgia went on to run out the clock to seal the victory.