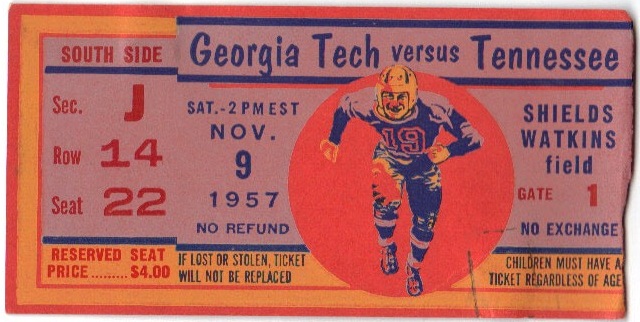 Fresh off of its most impressive win of the season against 7th ranked Duke, Georgia Tech would continue play against stiff competition when it headed to Knoxville to face the 9th ranked Tennessee Volunteers in their homecoming game. Tennessee stood at 5-1 with their lone loss coming against the Auburn Tigers in the season opener; a team that would go on to win the 1957 National Championship. The Jackets lost the previous meeting between the SEC rivals in a 6-0 decision in Atlanta one year earlier after tying the Vols 7-7 the last time they were in Knoxville. Tech’s last victory in the series came in 1954 when they triumphed 28-7 in Atlanta.

The Yellow Jacket offense quickly marched to Tennessee’s 37 to open the contest with the aid of a 29 yard Joe Delany run. But as he was being tackled, Delany lost the ball and Tennessee recovered with excellent field position at its own 38 yard line.

The squads sparred around for much of the first quarter before the Vols took over near midfield with little time left in the period. Five plays into the drive, Tennessee found itself at Tech’s 25 and tailback Bobby Gordon found Bill Anderson on a jump pass to the Tech four. Three plays later, Tommy Bronson scored on a one yard dive to give Tennessee a 7-0 lead just over a minute into the second quarter.

Later in the period, Tech’s Fred Braselton returned a punt 24 yards to Tennessee’s 46 to begin a promising drive. Floyd Faucette gained 8 yards to begin the drive and Braselton followed with consecutive 13 yard strikes to Paul Vickers en route to the Volunteer 9. From the 8, Jim Benson took three cracks at the line to advance to the 2, but Braselton’s fourth down pass fell incomplete and the Jackets failed to get on the scoreboard.

With the aid of stifling defense, the Vols continued to keep the Jackets at bay and eventually increased their lead midway through the third quarter. The score was the result of a 44 yard reverse by Bill Anderson that increased the lead to 14-0.

Tech manufactured a promising drive later in the period, but turned the ball over on a Braselton interception after marching 40 yards to the Tennessee 34 yard line.

The Volunteers opened the final quarter with a 6 play touchdown drive capped off by a 2 yard run by Carl Smith with 10:10 remaining in the contest.

Trailing 21-0, Tech looked to avoid a shutout after recovering a Volunteer fumble at Tennessee’s 17 yard line later in the period. Calvin James hit the line for 2 yards, Braselton found James Brantley for 11 more, and Tech was knocking on the door from the 4 yard line. Braselton went back to the air and connecter with Paul Vickers for the score to make it 21-6 after Urban Henry’s missed extra point.

The late score narrowly averted Tech’s third shutout of the season in the 21-6 loss. Tennessee would drop its next two games to Mississippi and Kentucky before defeating Vanderbilt to finish at 7-3 on the year. Their resumed was enough to earn them an invitation to the 1957 Gator Bowl, where they would narrowly defeat the Texas A&M Aggies by the score of 3-0.

– NOTE: The announcer incorrectly calls Jim Benson’s second quarter run a fourth down stop. Several other plays were not shown in the video