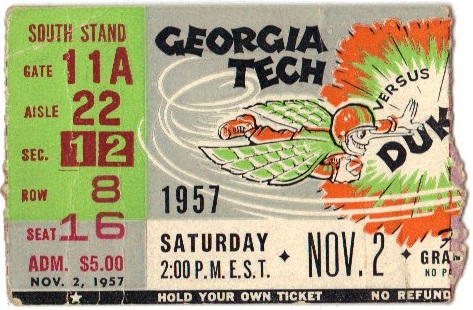 Having rebounded from two straight losses with a 20-12 victory over Tulane, Georgia Tech remained home to face the Duke Blue Devils at Grant Field. After starting the season at 5-0, Duke was tied by N.C. State one week earlier to fall to 5-0-1 on the year, dropping from 4th to 7th in the latest AP poll. The Jackets won their last two meetings with the Blue Devils by a combined 34-0 and had lost only once in the last five tries.

Tech got off to a fast start, marching from its own 32 to Duke’s 8 to open the game. But it was here that the drive stalled and the Jackets came away empty after Fred Braselton’s 24 yard field goal attempt was blocked by Bill Thompson.

After a quick Duke punt, the Jackets marched right back down the field, moving 40 yards to Duke’s 4 to threaten yet again. But Tech would come away empty once more when Braselton’s third down pass was picked off by Eddie Rushton, halting another promising drive.

The teams began exchanging punts until the middle of the second quarter when Tech began at its own 45 following a Blue Devil punt. Braselton found Taz Anderson for 10 yards to Duke’s 45 on first down before a few short runs were negated by an offsides penalty on the Jackets. He went back to Anderson for 8 more to the 36 and a personal foul on Duke helped the drive to the 17. James Benson then gained 10 yards on four runs and Braselton found Ted Smith at the 2. Benson scored two plays later to give the Jackets a 6-0 with 1:08 to play in the first half.

In the short time that remained, the Blue Devils turned the ball over on downs and Braselton threw an interception on a Hail Mary as the first half expired.

The Jackets opened the second half with a 44 yard kick return from their goal line to start their second scoring drive of the contest. Pass interference quickly moved the spot to the Duke 45 and Braselton found Calvin James for 11 yards to the 30 soon thereafter. On fourth down from the 22, Braselton hit Smith at the 15 to keep the drive alive. One play later, Tech’s young quarterback threw a screen pass to Lester Simerville that covered the final 15 yards for the score. His extra point was true on this occasion and Tech jumped ahead 13-0.

The remainder of the third and entirety of the fourth quarters were marked by solid defense and punting and the Jackets would complete their 3rd shutout of the season.

After falling to Tech, Duke would go on to finish its last three games at 1-1-1 to finish at 6-2-2 on the season. The performance earned them a berth in the Orange Bowl where they would eventually fall to the Oklahoma Sooners by a score of 48-21.