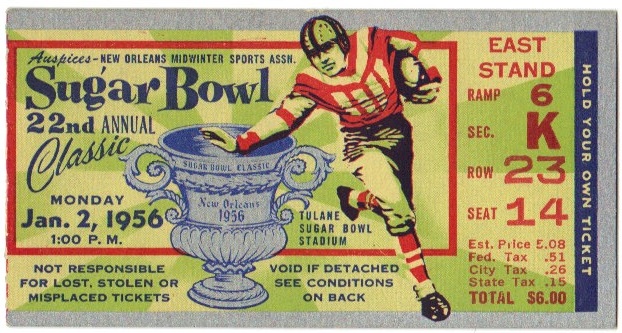 Having finished the regular season at 8-1-1 overall, the 9th ranked Georgia Tech Yellow Jackets earned a berth in the 1956 Sugar Bowl where they would square off against the 7-3, 13th ranked Pittsburgh Panthers.

Pittsburgh’s Bobby Grier would become the first ever African American football player to participate in the Sugar Bowl. The incident sparked much controversy, as Georgia Governor Marvin Griffin attempted to prevent the Yellow Jackets from participating in the contest with his December, 1955 letter to the Georgia Board of Regents. But in the end, both Grier and the Yellow Jackets were permitted to play in the contest.

The Yellow Jackets did little with the opening possession and quickly punted to Pittsburgh’s 20 early in the first quarter.

After gaining one first down, the Panthers handed the ball back when Pete Neft lost a fumble to Allen Ecker at the Panther 32 yard line.

Wade Mitchell attempted a deep pass to Don Ellis shortly thereafter and Grier was called for pass interference in the end zone. The penalty gave the Jackets the ball at the Pittsburgh one yard line and Mitchell snuck in for the touchdown one play later to give Tech a 7-0 advantage.

Pittsburgh nearly answered late in the second quarter after advancing deep into Yellow Jacket territory. But the Yellow Jacket defense held strong, as it had all year, and eventually forced a turnover on downs at the one yard line just before intermission.

The Panthers threatened once again in the third quarter, but lost possession when Ecker intercepted Corny Salvaterra to put an end to the drive.

Tech advanced 77 yards from its own 16 to the Pittsburgh 7 as the game moved into the final period of play. The Jackets were unable to score however, as George Volkert threw a pick to Ray DiPasquale with roughly nine minutes remaining.

The Panthers made one final threat when they mounted a drive deep into the Tech red zone late in the contest. But fate favored the Jackets on this day and Raplh Jelic was stopped at the five yard line as time expired, wrapping up Tech’s fourth shutout of the 1955 season and capping off a spectacular 9-1-1 campaign.

The win marked the seventh bowl victory in a row for head coach Bobby Dodd, improving his post-season record to a perfect 7-0 all-time. Tech’s last bowl loss came on January 1st, 1945 when they fell 26-12 to the Tulsa Golden Hurricane.