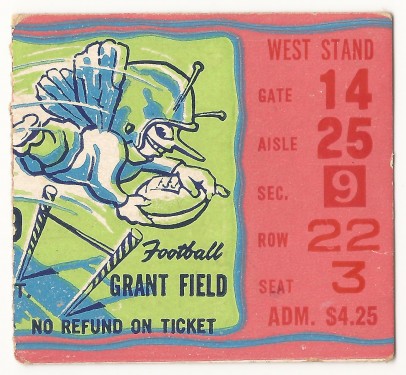 After rebounding from the season’s first loss with a 34-0 demolition of Florida State, 12th ranked Georgia Tech would play host to the 17th ranked Duke Blue Devils in the 1955 homecoming game.

Duke suffered its first loss of the season one week earlier when it fell 26-7 at home to the Pittsburgh Panthers after starting the season 4-0. Prior to the loss, the Blue Devils held the #5 spot in the AP poll after narrowly dropping the Ohio State Buckeyes in Columbus by a score of 20-14.

On the third play from scrimmage, Tech caught a break when Don Ellis forced a Dale Boyd fumble and Ormond Anderson recovered at the Blue Devil 31 yard line. The Jackets would score five plays later on a short run by Dicky Mattison to jump ahead 7-0 early in the first quarter. The touchdown was setup by runs of 18 and 7 yards by George Volkert.

After its defense forced a quick three-and-out, the Ramblin’ Wreck offense started again from the Duke 42 following the punt. Stan Flowers exploded for 20 yards on first down before Volkert followed with a 22 yard touchdown run to make it 14-0 just over six minutes into the game.

The remainder of the first half passed with little notable action as the squads exchanged punts up to intermission. After the break, the third quarter passed in similar fashion, with neither team threatening to score.

Early in the final period, each team punted once before the Ramblin’ Wreck defense provided a spark. With just under ten minutes to play, Johnny Menger picked off Robert Murray’s pass at the Duke 49 and raced into the visitor’s end zone to up Tech’s lead to 21-0.

With the game in hand late in the contest, Tech’s reserves took the field for its final drive, marching 53 yards on 11 runs to notch the final points of the afternoon. Toppy Vann snuck in for the touchdown with 1:52 to play to make it 27-0 after Walter Grant’s missed extra point.

The victory provided the second shutout in a row and third of the season for the stout Georgia Tech defense. Furthermore, Tech improved to 6-1 for the season and braced for a tough contest with the Tennessee Volunteers in Knoxville.

The Blue Devils would go on to tie Navy 7-7 one week later before winning their final three games to finish at 7-2-1 on the season.