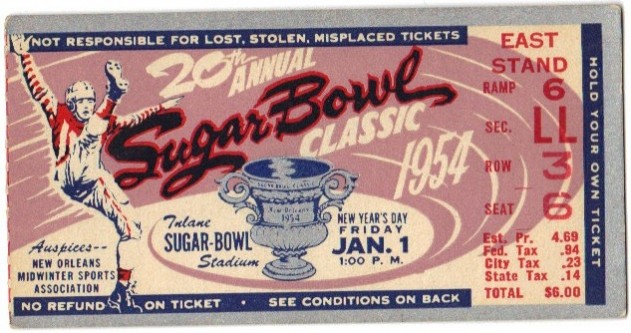 Vying for their fifth straight bowl victory, 8th ranked Georgia Tech would square off with 10th ranked West Virginia in the Sugar Bowl on January 1st, 1954. The Mountaineers entered at 8-1 with their lone loss coming at the hands of the South Carolina Gamecocks in the second to last week of the regular season.

They Yellow Jackets opened the contest with a 9 play, 67 yard drive to jump ahead 7-0 after the game’s first possession. Pepper Rodgers found Sam Hensley for the score with a 21 yard touchdown pass to cap off the drive.

The Mountaineers came back hungry, but had a 60 yard touchdown run called back for holding and would eventually punt the ball back to Tech.

Rodgers again led the Jackets to a score, this time traveling 68 yards in 12 plays and finding Jimmy Durham for a 1 yard jump pass in the end zone for the touchdown and a 14-0 advantage.

Late in the first quarter, West Virginia began marching towards their first score. Bob Moss gained 36 yards on three runs as part of a 10 play, 62 yard drive, while Danny Williams accounted for the touchdown with a 5 yard scamper to make it 14-6 after the missed extra point.

Shortly thereafter, Bill Teas lost a fumble in Tech territory and the Mountaineers were again on the move. But the Ramblin’ Wreck defense held strong at its own 15 yard line and forced a turnover on downs.

The Jackets mustered up another scoring drive before intermission, taking the ball 76 yards in 12 plays to go ahead 20-6 with less than a minute to play in the quarter. Bill Brigman got the drive started with passes of 10, 34, and 19 yards en route to the Mountaineer 13 yard line. Leon Hardeman raced in from 10 yards out a few plays later, but had his score nullified on an offsides penalty. Rodgers then returned at quarterback and was quickly hit for a loss to the 28, and another offsides penalty pushed the Jackets back to the 33. But Pepper connected with Glenn Turner and Henry Hair on consecutive passes of 13 and 15 yards before finally hitting Hair on a 5 yard touchdown with 47 second left in the half.

Tech caught a break early in the third quarter when Fred Wyant fumbled deep in his own territory and Dave Davis recovered at the Mountaineer 8 yard line. But the Jackets were held out of the end zone on this occasion and Rodgers eventually hit a 19 yard field goal to make it 23-6.

Midway through the period, the Jackets extended their lead to 29-6 on a 6 play, 74 yard drive. Hardeman accounted for 57 of the yards on two plays, the first a 34 yard draw and the second a 23 yard scamper for the touchdown.

With the victor already decided, each team added a pair of fourth quarter touchdowns to reach the final tally. West Virginia scored first on an 18 play, 82 yard drive that began in the third quarter and ended with a 1 yard run by Joe Marconi. The Jackets answered in three plays when Larry Ruffin reeled off a 43 yard sweep for a touchdown to make it 35-12. The Mountaineers came back with another solid drive, marching 54 yards in 8 plays and scoring on a 1 yard run by Tom Allman. Tech added the final score on a 9 yard sweep by Teas after recovering another Wyant fumble and the Jackets would win 42-19.

Tech became the first team ever to win a major bowl game in three consecutive years and kept Bobby Dodd’s bowl record perfect at 5-0. Their 268 yards passing was a new Sugar Bowl record, as was their 3-0 record in the annual contest.