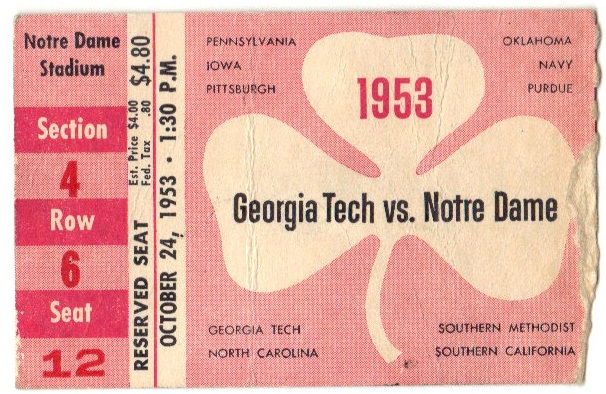 Georgia Tech entered the sixth week of the 1953 season having not lost in 31 straight games. Their last defeat came at the hands of Alabama on November 18, 1950 and they had gone 29-0-2 since, capturing two consecutive SEC titles and the 1952 National Championship. They would now put their streak on the line against the top ranked Notre Dame Fighting Irish in South Bend, Indiana. The Irish entered the contest at 3-0, having dropped 6th ranked Oklahoma and 15th ranked Pittsburgh, and looked to continue their hot streak against the 4th ranked Yellow Jackets.

Frank Leahy’s Irish got off to an impressive start when they drove 80 yards in 10 plays to score on the first drive of the contest. It was Joe Heap that broke the drive open with a 33 yard run to Tech’s 29 yard line. Johnny Lattner and Ralph Guglielmi then teamed up for 15 yards on the on the next two plays and Neil Worden followed with three consecutive runs to reach the end zone and give the Irish a 7-0 lead after just 4 minutes of play.

The Jackets turned away a second Irish scoring threat at the start of the second quarter when Tom McHugh lost a fumble to Bob Sherman at the Ramblin’ Wreck 7 yard line. The turnover put an end to a drive that began at the Irish 18 yard line and shifted the momentum in favor of Georgia Tech.

Midway through the second period, Dave Davis pinned Notre Dame at its own 1 yard line with a dart of a punt. The Irish escaped the trouble, however, and the teams would play a scoreless second stanza before heading to the locker rooms with Notre Dame ahead by seven.

The squads exchanged interceptions to start the third quarter and Tech would begin its second drive of the half at its own 31 yard line. Bill Teas kick-started the drive with a 12 yard run to the 43 and Leon Hardeman, Wade Mitchell, and Glenn Turner collectively pushed over the midfield stripe to the Irish 46. Mitchell then threw a 15 yard strike to Henry Hair and Teas gained 11 more to the 20. The Jackets moved to the 1 as Hardeman and Turner traded carries, and Mitchell finally snuck in for the tying score with 8:05 left in the third quarter.

The Irish wasted no time in answering their opponent, as Guglielmi led his offense 58 yards in 4 minutes to regain the lead on a 9 yard touchdown pass to Heap.

Trailing 14-7, Tech shot itself in the foot on its next drive when dropping back to punt from its own 13 yard line. Jim Morris made a bad snap on the play and Art Hunter recovered in the end zone for the Irish touchdown and a 21-7 lead.

At the start of the fourth quarter, the Jackets took over on a punt at the Irish 47 yard line. On the first play to follow, Teas caught a strike from Wade Mitchell at the 10 and raced into the end zone to get Tech within seven at 21-14.

But the Jackets would get no closer, and the Irish would ice the game later in the period with a 10 play, 40 yard touchdown drive. Lattner accounted for the touchdown with a one yard run with 5:40 to play that made it 27-14 after the missed extra point.

The Jackets would mount one final drive to the Irish 18, but failed to punch the ball into the end zone.

The loss ended Tech’s 31-game streak, while it improved the Irish to 4-0 for the season. Notre Dame would go on to finish 9-0-1 on the year, finishing with the #2 ranking in the final AP poll after suffering a tie against the Iowa Hawkeyes in South Bend.