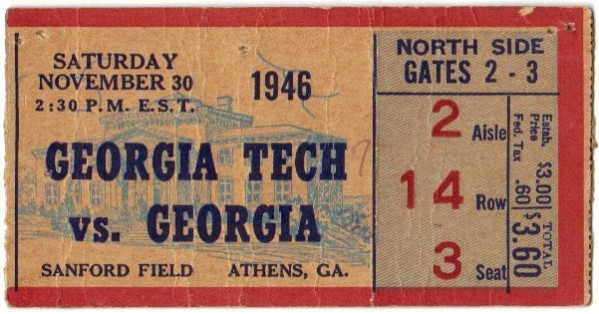 Having not lost since the opening week of the season at Tennessee, the 7th ranked Yellow Jackets would head to Athens to pin their 8-1 record against the perfect 10-0 mark held by the 3rd ranked Georgia Bulldogs.

Much of the first quarter would pass with little action before the Bulldogs started a promising drive late in the period. The march took 17 plays and consumed the remainder of the quarter before Georgia scored the game’s first points early in the second stanza. The touchdown came on a four yard run by Charles Trippi and the Bulldogs held a 7-0 advantage after the successful extra point.

Georgia would later extend its lead to 14-0 when Trippi hit John Rauch for a short touchdown pass with four and a half minutes to play in the half.

Tech narrowly averted disaster with little time remaining in the half when Jim Still had his pass intercepted by Rauch at the UGA 15 yard line. Rauch tossed a lateral to Dick McPhee and McPhee lateralled to Trippi in an attempt to break for a score with no time on the clock, but the Jackets luckily made a stop to keep the deficit at two scores with one half to play.

The Ramblin’ Wreck got off to a terrible start in the second half when Allen Bowen’s pass was intercepted by Trippi at midfield and returned to the Tech 29 yard line. The Bulldogs scored six plays later on a 10 yard pass from Rauch to Trippi to extend their lead to 21-0.

Georgia began another scoring drive from her own 18 late in the period. The Bulldogs moved 82 yards in 14 plays to go up 28-0 on an 11 yard strike from Rauch to Charles Smith, just one minute into the final quarter of play.

Tech scored its only points on the next possession when Bowen raced to the end zone on a 28 yard run to make it 28-7. But the celebration did not last long though, as Trippi answered with a 65 yard touchdown run on the first play of the ensuing Bulldog drive. The long run accounted for the game’s final points and the Jackets would fall 35-7 to their rival to close the regular season.

With the victory, Georgia finished a perfect 11-0 regular season and would go on to face the North Carolina Tar Heels in the Sugar Bowl. The Bulldogs won 20-10 in New Orleans to finish at 12-0, but would finish the season ranked 3rd behind #1 Notre Dame and #2 Army. All three squads finished undefeated, but the Irish and Black Knights played a 0-0 tie in New York City, creating controversy over who lays claim to the 1946 National Championship.