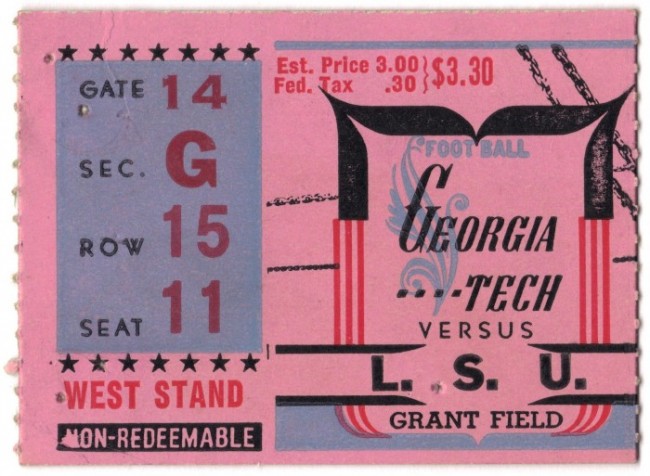 After dropping two straight games to Navy and Duke, the Yellow Jackets would face the 3-1 Louisiana State Tigers in front of a small crowd of 15,000 fans at Grant Field.

Tech got off to a quick start, recovering Steve Van Buren’s fumbled at the Tiger 35 yard line on the second play from scrimmage. Tech quarterback Eddie Prokop would advance the Jackets to the 12 yard line on three plays that included a 13 yard run and an 11 yard pass to J.I. Wilson. Red Broyles then burst through the middle for 12 yards and the touchdown to give the Ramblin’ Wreck a 7-0 lead early in the first quarter.

After LSU punted on their next possession, Tech would advance to the Tiger 47 yard line before Prokop threw an interception that was returned to the LSU 42. Just as it looked as if the Tigers had caught a break, Van Buren’s pass was intercepted by Prokop and returned to the LSU 11 yard line on the Tigers’ first play. Tech gained a first down after several short runs before Prokop snuck in for the score from within the one yard line, giving the Jackets a 14-0 lead.

LSU would score their only touchdown of the game on the following drive. Quickly advancing to the 50 yard line after several runs and an offsides penalty on Tech, the Tigers had finally gotten something going. Van Buren scrambled for 22 yards on the following play to advance to the Tech 28. Two short runs and a pass advanced the Tigers to the 10 and Van Buren raced in for the score on a fake pass, making it 14-7 in favor of the Jackets.

Prokop would throw an interception in Tiger territory on the next drive, but the Tech defense held strong and quickly forced LSU to punt. It was then that R.H. Cummings burst through the line to block the Tiger punt, which Tech would recover at the 22 yard line. Two runs gave the Jackets a first down at the 11 before a holding penalty pushed Tech back to the 26. But everything was going right for Tech, and Prokop connected with Phil Tinsley on a 26 yard touchdown strike to give the Jackets a 21-7 second quarter lead.

Tech would score once more before halftime after M.L. Wakefield intercepted Van Buren’s pass and returned the ball to the Tiger 33 yard line. Tech would throw one incomplete pass and run the ball for 8, 14, 8, and 3 yards in route to their fourth score. Broyles picked up the score for his second touchdown of the game and Tech would take a 28-7 lead into the locker room at halftime.

In the third quarter, the Jackets picked up just where they had left off. John Bell intercepted Van Buren’s pass on LSU’s first possession of the second half and the Jackets took over at the Tiger 45 yard line. Broyles ran to the 1 yard line on a fake pass and J.H. Dorough added the touchdown for a 35-7 lead. Tech would score once more in the third while fielding their second string. A third down reverse to Dorough for 35 yards put Tech at the 1 yard line and T.G. Carpenter punched the ball in for the game’s final score to give Tech a 42-7 lead. The Jackets would finish the game with their third and fourth string, easily pulling out the victory.

LSU finished the season with a 6-3 record, including a 19-14 victory over Texas A&M in the Orange Bowl. Despite his horrible game, Steve Van Buren would go on to earn All-SEC honors in 1943. After college, he played 8 seasons with the Philadelphia Eagles from 1944 through 1951, and was an All-Pro selection in each of his first seven seasons. He won two NFL championships and led the league in rushing four times (1945, 1947, 1948, and 1949). His #15 jersey is retired with the Eagles.