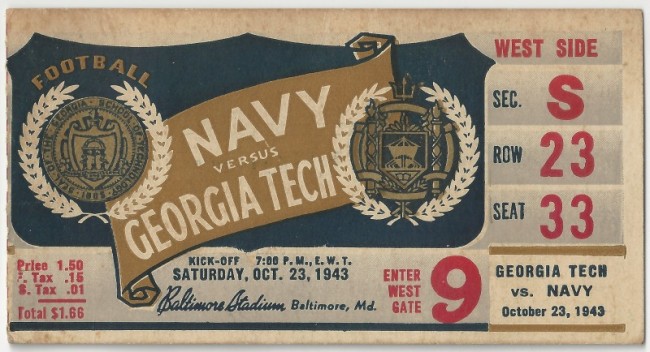 Carrying a record of 3-1, the Georgia Tech Yellow Jackets travelled to Baltimore, Maryland to face the 4-0, 3rd ranked Navy Midshipmen at Baltimore Stadium.

Even though they dominated the first quarter, the Ramblin’ Wreck missed on two key early scoring opportunities. After Tech kicked off to start the game, Mickey Logan recovered Jennings’s fumble at the Navy 31 yard line. Tech would drive to the 7 yard line before quarterback Eddie Prokop missed on a pitch to Mickey Logan and Navy recovered at her own 10. A few drives later, the Jackets recovered another Navy fumble by Benjamin Martin at the Midshipmen 21 yard line. Tech would again advance to the 7, but was unable to convert and turned the ball over on downs at the 9.

The Jackets would finally score late in the first quarter after taking over at the Navy 21 on a poor punt. The drive got off to a bad start as Prokop lost 12 on the first play. Tech’s quarterback then hit R.W. Gaston for 7 yards and ran 8 yards to the 18, making it 4th and 7. Just as things were looking bad yet again, Prokop scrambled for a 9 yard gain and a first down at the Midshipmen 9 yard line. Two plays combined for a yard and then Prokop passed to J.W. Kilzer for the game’s first score and a 7-0 lead.

Navy took over on her own 10 yard line on the Tech kickoff and the first quarter came to an end. The Midshipmen then mounted a 90 yard drive to even the score at 7-7. On third and seven from their own 37, Navy gained 53 yards on a reverse by Martin, advancing to the Yellow Jacket 10 yard line. A 15 yard clipping penalty would back them up to the 25, but then Harold Hamberg hit Martin for a 25 yard touchdown pass to even the score at 7-7.

The Jackets gave their opponent a break on the next drive. On second down, Prokop’s pass was tipped and Hillis Hume intercepted and returned to the Tech 40 yard line. Six plays would take the Midshipmen to the 25 yard line, then Hamberg hit Wayne Nelson on a 15 yard strike to the 10. The drive was capped off with a 10 yard run by Hamberg for the touchdown, giving the Midshipmen a 14-7 lead. The Jackets would go into halftime trailing by seven.

Tech continued to miss scoring opportunities in the second half. On their second drive of the third quarter, the Jackets took over at the Navy 34 yard line after a short punt. In two plays, Tech advanced to the 11 on a 12 yard run by Scharschwerdt and an 11 yard pass from Prokop to Kilzer. The drive ended prematurely, however, when Prokop’s pass was intercepted in the end zone by William Crawley. But Tech would bounce back on their next drive after holding Navy to a quick three and out. Taking over at the Yellow Jacket 48, Prokop hit Bobby Gaston for a 20 yard pass to the Navy 32 yard line. Prokop then connected with J.E. Brown four times in route to the end zone. The two hooked up on completions of 11, 5, 6, and 3 yards, the final resulting in the score to tie the game at 14-14.

But the Yellow Jacket celebration was short lived. Hamberg returned the kickoff 80 yards to the Tech 19 yard line, and Hume rushed to the 15 as the third quarter came to a close. After being stopped for no gain, Hamberg recovered a fumbled snap and threw a 15 yard touchdown strike to Dick Duden to give Navy a 21-14 lead.

Tech would punt on their next drive, and Navy would start again, gaining 24, 25, and 12 yards on consecutive plays to advance to the Tech 23 yard line. After two short runs, Hamberg passed to Albert Channel for another Midshipmen touchdown, making it 28-14. The teams exchanged punts for the remainder of the game and neither team threatened to score.

Navy would lose 33-6 at Notre Dame the following week before going on to win the remainder of their contests and finish at the 4th spot in the AP poll with a record of 8-1. The 14 points by Tech was the second most points scored on the Midshipmen in the 1943 season, second only to Notre Dame. Had Tech only taken advantage of the early scoring opportunities, the game may have played out in their favor.