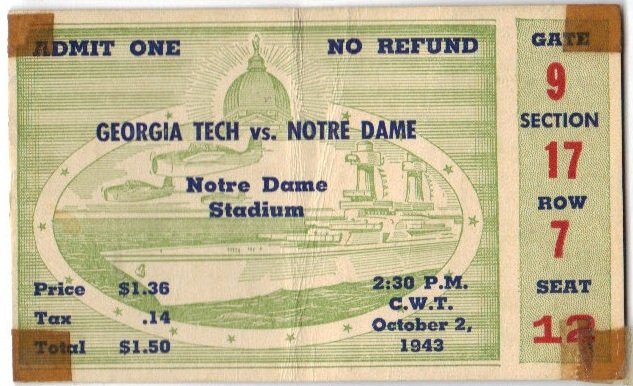 In week two of the 1943 season, Georgia Tech would travel to Notre Dame to face the 6th ranked Fighting Irish. Tech would be making its fourth visit to South Bend in five seasons, and held a record of 2-11 in the series, with the most recent win coming 13-6 in 1942. As the Irish had blown out Pittsburgh 41-0 the previous week, it looked as if the Jackets would have their hands full.

After neither team showed much on their first possession, the Irish made the most of their second. Taking over at the Notre Dame 22 yard line, the Irish marched 78 yards on 8 plays for the game’s first score. After a bundle of 10+ yard plays drove the Irish to the 5 yard line, Fullback Jim Mello added the exclamation point with the 5 yard touchdown run.

Tech was unable to make any noise on the following drive, and Notre Dame would add another score. Taking over at their own 30 yard line, the Irish mounted a 70 yard drive that was capped off by a two yard pass from Angelo Bertelli to Julie Rykovich for the score, increasing the lead to 14-0 early in the second quarter.

Staring at a two touchdown deficit, Tech started to battle back. Wilbur Stein returned the kickoff to the 39 yard line and Eddie Prokop hit J.H. Dorough for a quick first down. Shortly after, a pass interference call on the Irish moved the ball to the Notre Dame 23. Prokop hit J.W. Kilzer on a pass to the 13 and Prokop added two runs to advance to the one yard line. E. Scharfschwerdt added the final yard for the touchdown, cutting the lead to 14-7.

On the next drive, Tech held the Irish on the first three plays and forced a punt. The Jackets received a stroke of luck when George Manning blocked Bertelli’s kick and returned the ball to the Irish 26 yard line. Red Broyles then connected with M.J. Logan on Tech’s first play for the Jackets’ second touchdown, but a missed extra point would keep the lead with the Irish at 14-13.

On defense, Tech still had no answer for the Notre Dame attack, and the Irish would answer quickly on a 70 yard drive that contained 0 passes. Mello would punch the ball in from the 3 yard line with roughly three minutes remaining in the half to increase the lead to 21-13. The Jackets nearly scored before halftime to get within one as they mounted a drive to the Irish 5 with less than a minute remaining. It was all for naught, however, as Prokop’s fourth down pass fell incomplete in the end zone and the Jackets went into the locker room trailing by eight.

While Tech managed to keep things close in the first half, the second half was more of a massacre. Notre Dame scored three times in the third quarter to increase the lead to 42-13, while the Jackets did nothing more than punt and turn the ball over. The Irish would add two more fourth quarter touchdowns to increase the lead to 55-13 after missing the final extra point attempt. Tech did not threaten to score in the second half.

Notre Dame would go on to win their next seven games before dropping the final contest of the season 19-14 at Great Lakes. Despite this loss, the Irish would be voted National Champions by most major polls, including the AP. Irish quarterback Angelo Bartelli would win the 1943 Heisman Trophy.