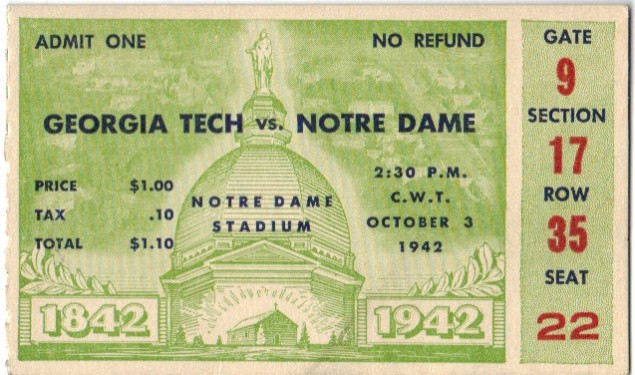 Fresh off a 15-0 defeat of the Auburn Tigers to open the season, the Georgia Tech Yellow Jackets headed to South Bend to face a Notre Dame team that had been tied by the Wisconsin Badgers in week one. Georgia Tech had not fared well against the Irish, winning just once in twelve tries in route to the 1928 National Championship.

Neither team would score in the first half with Tech coming the closest in the closing minute. The Yellow Jackets drove to the Notre Dame 4 yard line on a 34 yard pass from Eddie Prokop to Pat McHugh. Tech threw two incomplete passes and an interception to Irish quarterback Angelo Bertelli to end the drive.

Notre Dame nearly scored on their first possession of the third quarter. Beginning at their own 17, the Irish quickly advanced to the 38 on two plays. Bertelli then hit George Murphy on a pass to the Tech 44 yard line. Bertelli hit Creighton Miller on next play to take the ball to the Tech 23, but the drive went awry when Bertelli threw an interception to Tech’s George Manning at the 10 yard line.

Midway through the third quarter, Tech caught a break. After starting at the Irish 18 yard line, Bertelli fumbled and Tech’s Clint Castleberry recovered at the 27. On the first play of the drive, Tech’s Robert Jordan took an end around to the 18. After McHugh gained 5 yards on a run, he caught a tipped pass by Prokop to advance to the Irish 1 yard line. Ralph Plaster would finish off the drive with a sneak for the touchdown. Tech would add the extra point to take a 7-0 lead.

Tech’s defense quickly held the Irish to a punt, and Castleberry returned the kick 17 yards to the Notre Dame 41 yard line. The Jackets were on the move again in Notre Dame territory. Plaster advanced to the 28 on the drive’s second play, and several plays later, McHugh picked up a first down on the first play of the fourth quarter. Marshall would then gain 4 yards to the Irish 8 yard line. Castleberry connected with McHugh for Tech’s second touchdown on the following play, giving the Jackets a 13-0 advantage after the missed extra point.

Notre Dame would answer quickly. Starting on their own 27 yard line, the Irish marched to the Tech 34 with very little effort. Creighton Miller exploded for 19 to the 15 yard line and Tom Miller capped off the drive with a touchdown on the following play. Bertelli would miss the extra point and the Tech lead would remain seven at 13-6.

Notre Dame staged another potential scoring drive, but George Manning intercepted an Irish pass at the Tech 27 and the Jackets would run out the clock for the victory. It was Tech’s first win at Notre Dame Stadium and just their second victory ever over the Irish. Notre Dame would climb as high as 4th in the AP poll and go on to finish with a record of 7-2-2.