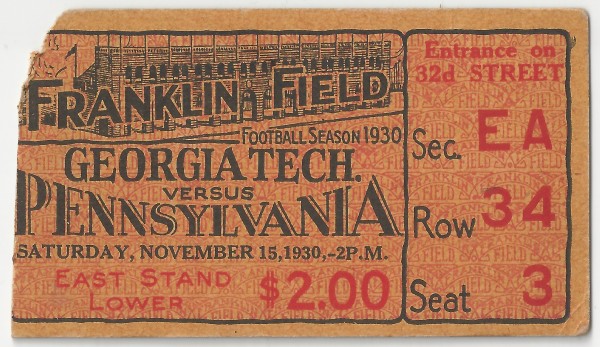 Having not won since defeating Auburn 14-12 a month earlier, 2-3-1 Georgia Tech would face a tough opponent in the 4-2 Pennsylvania Quakers at Franklin Field in Philadelphia, PA in mid-November. The Jackets won the only previous meeting between the two schools when John Heisman’s 1917 team trashed his alma mater 41-0 at Grant Field en route to the Institute’s first-ever National Championship.

After each squad failed to score on its opening possession, Penn took over at its own 38 following a Georgia Tech punt. The Quakers slowly pushed into Yellow Jacket territory before Carl Perina found Paul Riblett for 30 yards to the Ramblin’ Wreck 17 yard line. Perina then added 14 yards on the ground for another first down and Charles Greene took a lateral to the end zone two plays later for a 7-0 lead.

Late in the first quarter, Tech was forced to punt after failing to convert a first down from its own 17. Vance Maree’s boot was fielded by William Graupner at his own 45 and returned 55 yards in spectacular fashion for a touchdown to increase the Quaker lead to 14-0.

Twice the Jackets failed to convert a first down, and Penn began at the Georgia Tech 45 early in the second period. The Quakers needed eleven plays to cover the distance, finally scoring on a 5 yard run by Greene to increase the lead to 20-0 following a botched extra point attempt.

On the ensuing kickoff, Penn was called for holding and the Jackets would begin at the Quaker 40 after the return. Bob Strickland gained 13 on first down to the 27, and a 15 yard holding penalty on the Quakers helped the Jackets to the 15 yard line. The drive went awry a few plays later, however, when Tom Jones fumbled a completed pass and Riblett recovered for Penn at the 16.

The squads sparred around for the remainder of the half and the Quakers would take a twenty point lead to the locker room at the break.

The Jackets drove into Penn territory from their own 23 to start the second half, but came away empty when Jap Hart threw a pick to Perina at the Quaker 30 yard line.

The teams then traded punts for the next several drives before Tech took over at the Pennsylvania 47. An early holding penalty advanced the Jackets 15 yards to the Quaker 27, and Hart followed with a 12 yard run to the 15. Ben Cherry then added 5 yards and Hart followed up with a 10 yard touchdown run to get Tech on the board, trailing 20-7.

Tech again pushed within the Quaker red zone as the third quarter came to a close, but eventually turned the ball over on downs at the 16 early in the final period.

A series of turnovers ensued, ending when Penn recovered a muffed punt by Hart at the Yellow Jacket 13 yard line. The Quakers would score shortly thereafter on a one yard run by Lionel Collis to extend the lead to 27-7.

The Jackets would not threaten again, but Penn would add a late touchdown to reach the 34-7 final. George Munger accounted for the score on a short run from within the Tech 2 and the contest would come to a close soon thereafter.

Penn would lose its final two contests to Cornell and Navy to finish the year at 5-4, overall.