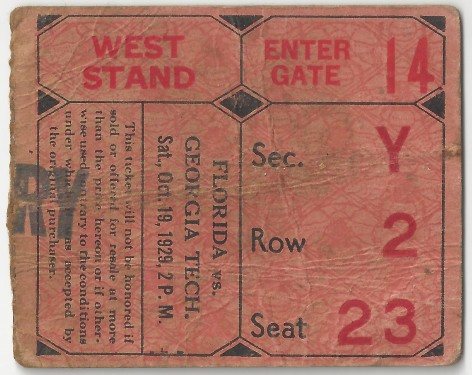 Having fallen to North Carolina 18-7 one week earlier to end a fifteen-game winning streak, defending National Champion Georgia Tech would host the Florida Gators in its third straight home game to start the 1929 campaign. The Gators entered at 3-0 after dropping Auburn 19-0 on the road, and had given up just one score on the young season. The teams last met in 1925 when Georgia Tech took a 23-7 decision to improve to 4-0-2 in the all-time series.

After giving up a 35 yard return to open the game, the Jackets caught a break when Leroy Bethea lost a fumble to Warner Mizell at the 50 yard line. Tech gained little on the drive, however, and quickly punted to Florida at its own 23.

The Gators booted it back shortly thereafter, and Tech gained possession at the Florida 27 after a poor punt. John “Stumpy” Thomason gained 6 yards on two runs before Mizell found Vance Maree for a 19 yard touchdown pass to put the Jackets on top 7-0.

The remainder of the quarter passed with a barrage of exchanged punts and came to a close with the Gators in possession at their own 43 yard line.

On the first play of the second quarter, Tech’s Earl Dunlap picked off a tipped Royce Goodbread pass at the Yellow Jacket 35 and returned the ball 11 yards to the Ramblin’ Wreck 46. Mizell then reeled off a long run to the Gator 23 on first down to setup a 25 yard touchdown pass from Dunlap to Maree three plays later. The score increased Tech’s lead to 13-0 after Thomason’s missed extra point attempt.

Dunlap recovered a Florida fumble at the Gator 39 yard line early in the next series, but the Jackets were unable to capitalize on the opportunity and were forced to punt it away.

The remainder of the second period was filled with punts from both schools, and the Jackets would hold a thirteen point advantage at halftime.

Midway through the third quarter, Florida mounted a threat when it pushed from its own 30 to the Yellow Jacket 26 yard line. But the Jackets then took advantage of a Goodbread fumble when Sid Williams recovered at Tech’s 42 to put an end to the march.

On first down, Mizell connected with Thomason 23 yards down field and Thomason raced the remaining 35 yards to the Florida end zone for a touchdown. The score would give Tech a 19-0 lead after the latter missed his second extra point attempt of the day.

The Gators collected themselves on the ensuing drive to quickly push into Yellow Jacket territory when Clyde Crabtree found Bethea for 15 yards to the Tech 39. A combination of run and pass pushed Florida to the Yellow Jacket 6, from which Bethea found Rainey Cawthon on a lateral pass for the touchdown to make it 19-7.

Early in the fourth quarter, Thomason reeled off 45 yards to Florida’s 12 to put the Jackets in position to score. The Ramblin’ Wreck offense would come away empty, however, after sloppy play eventually resulted in a turnover on downs at the Gator 25 yard line.

Florida followed suit later in the period when it pushed to the Tech 15 before eventually turning the ball over on downs at the 20.

The Jackets caught another break when Frink picked off Luke Dorsett at the Florida 43. Mizell hit left tackle for 25 yards one play later and Dunlap followed with two runs to push to the 12. But sloppy play proved too much to overcome, yet again, and Tech came away empty after a turnover on downs.

Mizell grabbed another interception on the first play of the ensuing drive, and Tech took back over at the Florida 27 yard line. But with little time remaining, the Jackets simply pushed forward to the Florida 19 to chew the clock and come away with a twelve point victory.

Florida would go on to win five of its remaining six games to finish the year at 8-2, overall. Their only other loss came to Harvard in Cambridge, MA two weeks later.