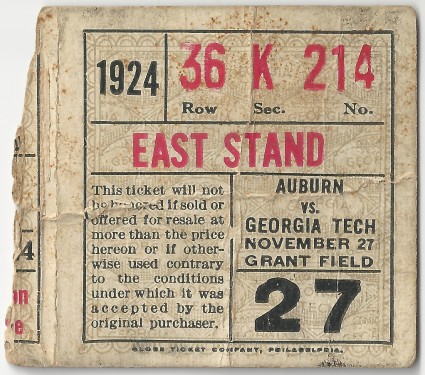 On Thanksgiving Day, 1924, Georgia Tech’s Golden Tornado would host the rival Auburn Tigers at Grant Field. Auburn entered the contest at 4-3-1, having dropping their previous three games to Vanderbilt, Tulane, and Georgia. The Jackets also entered at 4-3-1, dropping three of their last four to Alabama, Notre Dame, and Vanderbilt. Tech’s lone win during the stretch came against the Louisiana State Tigers in Atlanta. When the teams met one year prior, the result was a 0-0 tie, a feat that nearly occurred again to cap off the 1924 season.

The game got off to a slow start in the first quarter with each team punting before an Auburn drive started to materialize. The Tigers got started when S.D. Peterson reeled off a 25 yard run to the Yellow Jacket 40. E.E. Williams and Paul Turner ran on consecutive plays for a first down before Auburn attempted a drop kick field goal. The kick was short, however, and Douglas Wycoff recovered for the Jackets and returned the ball to the Tech 21 yard line.

Tech’s Ike Williams gained 5 yards on the first play of the ensuing drive before Wycoff followed with a 43 yard rumble to the Auburn 31 yard line. Wycoff hit E.G. Nabelle at the Tiger 15 a few plays later, but the Yellow Jacket end fumbled the ball while being tackled and Auburn’s J.D. Lawrence recovered deep in Tiger territory.

The second quarter saw three promising drives end on missed field goals with Tech’s Ike Williams missing two from formation and Auburn’s E.E. Williams missing one drop kick. The squads would head to the locker rooms knotted at 0-0 after one half of play.

Tech made what was nearly a costly mistake to begin the third quarter when Nabelle fumbled the opening kickoff and Auburn recovered near the Yellow Jacket 30 yard line. The Tigers would advance a bit, but eventually miss a field goal wide right and the Jackets would take back over at their own 20.

The teams spent much of the third quarter punting back and forth before Auburn finally began a drive that moved them all the way to the Ramblin’ Wreck 25 yard line. But on an attempted pass from Peterson to Carson Greene, Wycoff leapt to snatch the ball out of the air for a Yellow Jacket interception. The Tech star returned the pick 17 yards to his own 27 before he was finally stopped.

The Golden Tornado then started advancing down the field in five yard chunks, gaining five first downs en route to the Tiger one yard line. Two Wycoff runs left the ball two feet from the end zone as the third quarter expired. On the first play of the final period, Wycoff ran over center and extended the ball just over the goal line for a Ramblin’ Wreck touchdown. Williams added the extra point to give the Jackets a 7-0 lead with one quarter to play.

Neither team would threaten to score for the remainder of the contest and the Yellow Jackets would intercept two more Auburn passes before the game was in the books.

References:
Congdon, George. “Wycoff Stars as Techmen March 90 Yards Down Field To One Touchdown of Game.” The Atlanta Constitution. 18 Nov. 1924