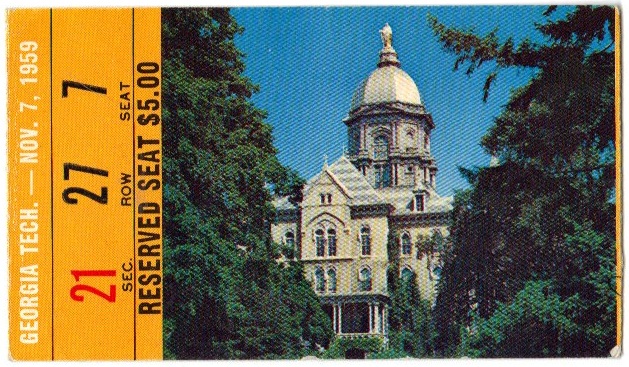 Fresh off of a disappointing loss to the Duke Blue Devils at home, Georgia Tech headed to South Bend to renew its rivalry with the 3-3 Notre Dame Fighting Irish. The teams last met in 1953 when the then top ranked Irish defeated the 4th ranked Yellow Jackets for their first loss in 31 games dating back to the end of the 1950 season. Tech’s last victory in the series came in 1942 when Georgia Tech legend Clint Castleberry led the Jackets to a 13-6 victory in South Bend.

In sub-freezing conditions, the game got off to a wild start with a first quarter that featured six turnovers (four by the Yellow Jackets and two by the Irish).

On the first play from scrimmage, Harold Erickson recovered a Bob Scarpitto fumble at the Fighting Irish 39 yard line. Tech then gave it right back when Marvin Tibbetts was picked off at the Notre Dame 10 by Don White. The Jackets forced a punt, but Floyd Faucette muffed the return and Ken Adamson recovered for the Irish near midfield. John Reed stripped the ball from Scarpitto to regain possession at the 47, but the Jackets were soon forced to punt. A series of punts ensured until the Jackets eventually mounted a drive into Notre Dame territory. The march ended prematurely however, when Adamson recovered yet another Tech fumble at the 28. An Irish punt then put the ball back in Tech’s hands before Bill Williamson lost another fumble to Monty Stickles near the end of the first quarter.

The Irish put the first points on the boards 2:15 into the second period with a 41 yard field goal to jump ahead 3-0.

Tech would gain two more takeaways in the second period, but failed to capitalize on either occasion. In the first instance, the Jackets recovered a Scarpitto fumble at the Notre Dame 29, but were eventually forced to punt. The second came later in the period when White was picked off at the Tech 5 to halt a promising scoring opportunity for the Irish, and a first half that featured eight turnovers came to a close with the Jackets trailing by three.

The Irish opened the third quarter with a strong drive out to their own 48 yard line. But the first half trend continued when Williamson intercepted a pass at the Tech 30 and returned the ball to the Notre Dame 49.

Taz Anderson gained 2 on first down before racing 32 yards to the Irish 15 on second. Tibbetts reeled off 11 more to the 4 and Anderson pushed on to within the 1. Tibbetts then snuck in for the score to cap off a 5 play, 49 yard touchdown drive to put the Jackets ahead 7-3 5:51 into the third quarter.

The Irish moved all the way to the Tech 9 on the ensuing drive, but lost possession on a Red Mack fumble at the 10.

The rest of the third quarter passed with little action and the Jackets carried a four point lead into the final stanza of play.

Beginning from their own 15, the Irish marched 85 yards in 5 plays to snatch back the lead on their first drive of the fourth quarter. Two short gains were followed by an 18 yard pass from White to Herman. Dick Naab then gained 21 yards to the Tech 43 before White went back to the air to find Stickles on a 43 yard touchdown strike to make it 10-7 with 11:34 to play.

But the Jackets refused to quit and gained excellent field position after returning the kickoff 41 yards to the Fighting Irish 44 yard line. Anderson, Nix, Tibbetts, and Faucette alternated carries en route to the Notre Dame red zone with none gaining more than 7 yards on any single run. Anderson converted a huge first down on 4th and 1 from the 12 and Tibbetts scored from the 8 two plays later to regain the lead for Tech at 14-10 with 4:27 remaining.

A quick Irish punt put the ball back in Tech’s hands with 3:00 to play. After chewing some clock, the Jackets pinned the Irish at their won 8 with an excellent punt and sealed the game shortly thereafter when Charles Graning intercepted George Izo at the Irish 38 yard line.

The win was just Tech’s third victory in eighteen attempts against the Irish.

Notre Dame went on to win two of its final three games to finish at 5-5 on the season.